At the end of 2012 there is incontrovertible evidence that our planet is warming at a significantly rapid rate. 2012 is set to be the 9th warmest year since records began. This warming is not on a straight line basis so if you select decade size timelines within the last century it is possible to show that the warming is leveling off or even cooling in that specified zone, this is not an indicator that global warming is not either occurring or slowing down.

At the end of 2012 there is growing concern that the temporary levelling of global temperatures on land is being caused by rising temperatures in the oceans as the seas absorb atmospheric heat.
The upturn in global land temperature when it occurs (which it must if you believe in the greenhouse effect) may be more rapid than existing climate models indicate with far reaching consequences for all life on earth.

The relentless rise in CO2 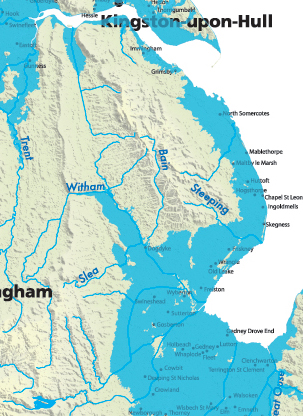 This is how our county will look with a 5m sea level rise.

We are happy to publish comments constructive to the debate, particularly ones that are implicitly factual. To speed up the comments process the anonymous user facility is available but I will only publish and respond to comments if I know who you are :) That way we shall all remain accountable for what we say.

If you wish to discuss any of the issues around wind power please email jpocklington@fastmail.fm or phone 07939205346
Thanks
James